Vilanova: “Not an easy group”

Vilanova: “Not an easy group”

Assistant coach Tito Vilanova reckons the Champions League draw is anything but easy, noting that all three rivals “are national champions”. Vilanova was disappointed to draw Rubin again, but happy to begin the group with a home game.

Panathinaikos, Copenhagen and Rubin Kazan are Barca's rivals in this season's Group Stage and for Tito: “no way is it an easy group. There's no such thing in the Champions League. All three of them won their national leagues. I'm most worried about us believing it is easy. In a group with so many games there's always the chance of a slip up and things getting complicated”.

Vilanova still remembers last season's clashes with Rubin and admitted: “we were not too keen on getting them again, it's a very long trip, but at least this time we have the advantage that we know more about them. In our first year year we drew Shaktar from the fourth group of teams and they were the toughest – the same thing has happened this time around with Rubin”.

Vilanova was more pleased with playing the first and last games of the group at home, explaining: “as well as the rivals you draw, the order of the matches is very important. It's better to start at home because the players are still at the start of the season and not yet up to full fitness, they will be just back from international duty and not having to travel is a big plus”. 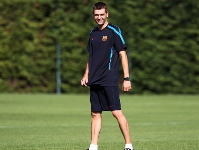