The players were back in training on Thursday after Wednesday evening’s victory in the Joan Gamper Trophy. Guardiola was able to work with the full squad except for Swedish international Ibrahimovic, who exercised in the gym due to an ankle problem.

The absence of Zlatan Ibrahimovic was the main talking point of Thursday’s training session. A total of 20 players worked out on the Club's training grounds including Hleb and Cáceres. However, Puyol and Adriano exercised separately from the main group. There were no players from the reserve squad as Barça B are preparing their first league match of the season against Celta Vigo.

Ibra works in the gym 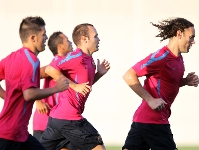 An Achilles problem in his right ankle kept Ibrahimovic behind in the gym to follow a series of recovery exercises. The Swedish striker was the only player absent from the first post-Gamper training session ahead of the league opener against Racing Santander.

Specific exercises for Puyol and Adriano 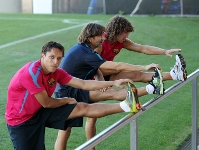 For their part, Puyol and Adriano followed a separate programme based on stretching exercises during the first fifteen minutes of the session.

Before the session got underway, Josep Guardiola congratulated Adriano for his performance in Wednesday evening’s match. A nice gesture by the manager, who had also mentioned the Brazilian in his press conference prior to the Joan Gamper Trophy. 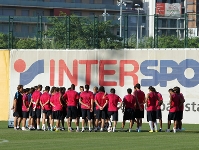 Barcelona is currently experiencing a heat wave and for this reason Friday’s training session has been brought forward to 8.30 am, half an hour earlier than usual. After training, Pedro Rodriguez will give a press conference.