Barca will face the Greek, Danish and Russian champions in the Group Stage of this year's Champions League, Panathinaikos and Rubin Kazan have played Barca before, but this will be the first time Copenhagen and Barca have met.

At first glance, Barca's Group appears to be less fearsome than last year's, but with three national champions in the mix, it would be wrong to underestimate the rivals.

Panathinaikos won the Greek league by a clear six points over their great rivals Olympiakos and their biggest names are the French trio of Boumsong, Govou and Cissé. Coach Nikos Nioplias can also count on important members of the Greek squad such as Karagounis, Katsouranis or the ex-Atletico Madrid player Seitaridis. 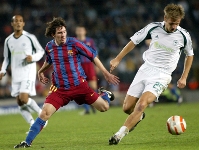 Barca beat Panathinaikos in the 2001/02 Champions League quarter finals, winning 1-0 in Greece and 3-1 at the Nou Camp and the two teams met again in the Group Stage of the 05/06 competition when they drew 0-0 in Athens and Barca won 5´0 at home with a hat trick from Eto’o.

Copenhagen have won the last two Danish leagues and become one of the best Scandinavian teams of recent years. Coached by the Norwegian Stäle Solbakken, FCK play an effective, if not particularly spectacular football with veteran Jesper Gronkjaer providing a touch of class. Brazilian César Santin is their main goalscorer, Swedish defender Mikkael Antonsson provides solidity at the back and their captain Hjalte Norregard is a tireless midfield presence.

The two teams have never met in European competitions. 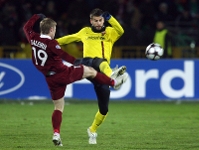 Nobody should be surprised by the Russian Champions after last season's great performances in the Group Stage where they faced Barca, Inter and Dynamo Kiev. Guardiola's team will have to deal with a harsh climate and the core of last year's Rubin team who caused them so many problems. One important change in the Russian team has been the replacement of striker Chori Domínguez with the Nigerian Obafemi Martins. In addition, the Brazilian midfielder Carlos Eduardo has joined from Hoffenheim. After 18 games, Rubin are second in the Russian league, four points behind leaders Zenit.

Rubin Kazan pulled off one of last season's big shocks when they beat Barca 1-2 at the Nou Camp. In the return game, the two teams fought out a goalless draw in freezing conditions. 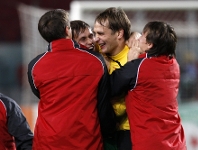 Barca will have to visit the following stadiums: The Olympic Stadium in Athens(70.000 capacity),Parken Stadion in Copenhagen (42.000) and the Centralny (30.000).