Speaking immediately after the draw for the Champions League group stage in Monaco, Andoni Zubizarreta called for “the maximum respect” for Panathinaikos, FC Copenhagen and Rubin Kazan.

Zubizarreta attended today’s draw in Monaco to hand over the award for best goalkeeper. Afterwards he spoke to Barça TV and www.fcbarcelona.cat to analyse the three teams Barça will now face in Group D.

"We can’t take anything for granted"

The former Barça and Spain goalkeeper, now head of professional football at the Club, warned: We can’t take anything for granted. Barça will have the maximum respect for our opponents. If they’re in the draw it’s because they’re earned the right to be there. I’m sure we’ll find they have their strong points”.

Turning to an assessment of each team individually, he described Panathinaikos as a “difficult team” while he highlighted that Copenhagen was a team not often seen in the Champions League. As for Russian champions, Rubin Kazan, who FC Barcelona also met last year in the group stage, Zubizarreta stressed the difficulties posed by the long trip to Russia.

Better to finish at home

Before the fixture schedule was announced, Zubizarreta revealed that he would prefer to have the last match at home. As it turned out, Barça’s last match of the group stage will be in the Camp Nou against Rubin Kazan. 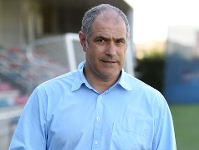 From one great keeper to another

Andoni Zubizarreta was the man chosen to hand over the award for the best goalkeeper of the Champions League 2009-10 to Inter’s Brazilian international Julio Cesar.