The young midfielder will spend this season on loan to first division club Getafe. He will be unveiled by the Madrid-based club at noon on Friday.

In the 2008-09 season, this versatile player played an active part in winning the treble. Guardiola knew him from his days in charge of the reserves and used him in 12 games, 7 in the league, 3 in the Champions League and 2 in the Cup. 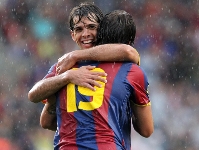