Guardiola proud of the team and fans

Guardiola proud of the team and fans

Pep Guardiola stated that he was proud of his FC Barcelona side after seeing them win the Trofeo Joan Gamper on Wednesday evening and was pleased to see Ronaldinho back at the club.

The Blaugrana boss highlighted his players’ attitude in the 1-1 draw against AC Milan. The hosts won the cup on penalties and deserved it after the impressive performance that they produced throughout the 90 minutes.

Ronaldinho was honoured by the fans for what he did during his time at Camp Nou and Guardiola was pleased. “I am delighted with the fans, it was marvelous,” he said. 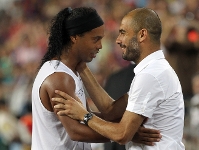 “Ronaldinho came into our dressing room before the game,” Guardiola then revealed. “He was in great form and met many of his former team-mates. On the pitch the people showed their devotion to him and I think he was pleased.”

On the game itself the coach continued: “I am happy with how we played against a good team. We learned when we have to do when the opposition play on the counter-attack like they did. We had a good few chances and I felt everyone played their part. I am pleased with how the game went and that we won.”

Zlatan Ibrahimovic has told the media that Guardiola has only talked to him twice in the past six months, but the coach was unperturbed. “We have no communication problems,” the trainer said. “For the good of the club it is better I do not say any more. There is always a reason, but I am not going to explain it now. I am very communicative. I am not going to go into the reasons. When the time is right I will give my opinion.” 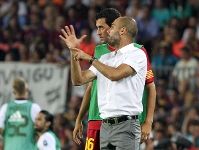 Guardiola was then asked whether he feels Ibrahimovic will still be here after the close of the transfer market. “If he is here after the August 31 then he will play here,” he explained. “I will talk with him about things. The problem is not that we have spoken twice. I have the duty to turn this round. I have no problem with Ibra in his work, but the person always comes before the person. Probably this will be resolved by talking.” 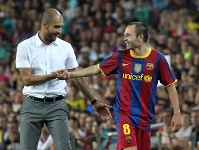 On Sunday FC Barcelona open the new league season Racing Santander. “Tomorrow we will look at Racing and we will begin to prepare to go to Santander,” Pep Guardiola said.