Five B team youngsters in training

Five B team youngsters in training

With the Gamper Trophy due for Wednesday and the league set to kick off in Santander on Sunday, the squad trained at the Ciutat Esportiva this morning.

Twenty two first team players and five Barca B youngsters trained under Guardiola in the second session of the week. 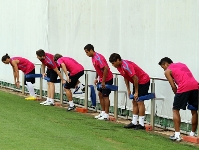 Wednesday's game against Milan and Sunday's league debut against Racing are the focus of training this week and Guardiola decided to bring in five youngsters this morning - Oier, Mińo, Fontŕs, Thiago and Jonathan Dos Santos - ahead of the two games in just five days.

Diego Simeone was again watching the session at which the players used the official ball of the new league season . 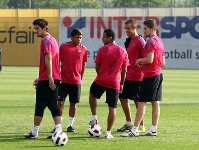 The squad will return to training tomorrow morning at 11.30, after which they will be free until 18.15 when they are due to report to the ground ahead of the 19.45 kick off of the game against Milan.