This year's Gamper will be the eighth visit of Milan to the Nou Camp, with Barca having won four of the games between the two in Catalonia and Milan just one, with two games ending in draws.

A Barca - Milan game is always one of the classic European ties and two of the continent's biggest clubs will meet for the eighth time at the Nou Camp on Wednesday in the 45th edition of the Joan Gamper Trophy. 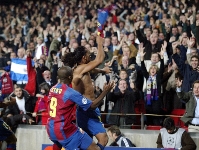 This will be Milan's third appearance in a Joan Gamper Trophy, having previously been invited in 1986 and in 2004. Their first visit came on 19th August 1986, when the trophy was still played between Barca and three invited teams. Milan and Terry Venables' Barca met in the second semi final with Pedraza, Hughes and Víctor giving Barca a 3-1 win -Tony Hateley scored the Italian's only goal. In the third /fourth place play off, Milan beat Spurs 2-1, whilst Barca beat PSV 1-0 in the final.

Milan's second appearance came in the 2004 edition when Carlo Ancelotti's team went one up through a Serginho goal, only for goalscorers Giuly and Andrés Iniesta to lead an epic fightback to make it 2-1 at the end of the game. 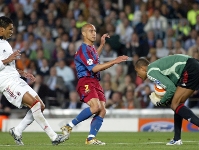 Milan's last visit to Barcelona came on April 26th 2006 when Barca and Milan met in the second leg of the Champions League semi final with a place in the final up for grabs. Rijkaard's team had taken a valuable 0.1 lead from the San Siro thanks to a goal from Giuly and they held out for a goalless draw at the Nou Camp to see them through to the Paris final against Arsenal.

Milan's only win at the stadium came on September 26th 2000 in the group stage of that season's Champions League when Zacheroni's team won 0-2 with goals from Coco – who later signed for Barca – and Bierhoff. This proved to be a bad defeat for Serra Ferrer's team who a few week's later were eliminated from the competition. 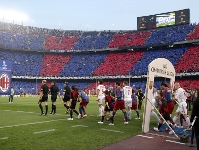 Seeds of the Dream Team against Sacchi's Super Milan

On 23rd November 1989, UEFA Cup winners Barca hosted European Cup winners Milan in the first leg of the European Super Cup. The wonderful football machine of Van Basten, Gullit, Rijkaard and Baressi took on Joahan Cruyff's up and coming Barca team who were already making their mark as the Dream Team began to take form.

The game ended 1-1, with Van Basten scoring for Milan and Amor putting away a penalty for Barca after a game in which Barca showed all their trademark attacking ambition and Milan all their experience. The return game ended 1-0 for Milan, thanks to a goal from Evani which gave them the Super Cup.