Gabriel Milito has been called up to the Argentina squad by national coach Batista nearly 20 months after the last time.

The defender celebrates his 30th birthday on September 7 and he could receive no better present tan to be recognised by his country once again. Argentina take on world champions Spain in a friendly in Buenos Aires.

Batista announced his squad on Friday afternoon making 878 days since Milito was last named in a squad by the Albiceleste and he was last seen in an Argentina shirt on March 26, 2008.

A month-and-a-half after his last game for the national side Milito suffered a serious knee injury that has taken him 20 month to recover from. Now he is back in action and his efforts have been recognized at the highest level. 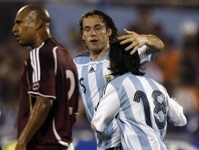 Dani Alves has been named in the Brazil squad for a training camp in Barcelona during September.