“The team is ready to go out and win”

“The team is ready to go out and win”

Guardiola reckons his World Cup winning players are “more prepared” than they were a week ago and believes his team can come from 3-1 down to take the Spanish Super Cup. The boss also refused to rule out that more new signings could be on their way. 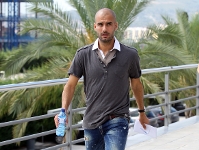 Barca will go into this Saturday’s second leg with a stronger squad after Guardiola has had a week to work with his returning Spanish stars and he explained: “they are getting better with every day. They’re still not 100%, but they are improving. I don’t think that they will play the full 90 minutes, but the team is ready to go out and win “.

It won’t be easy to peg back Seville’s advantage and Guardiola called on the fans to come along and give the team all the support they can: “I hope we get a lot of supporters. There’s a title at stake and we need the fans’ help. After what the players achieved last season, they deserve a full house for this game”.

Seville will be coming to compete 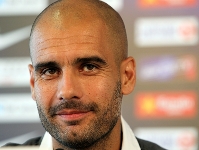 Guardiola is well aware that Seville will be a tough team to turn over, though he also knows that the defeat in midweek to Braga in the Champions League and the return leg on Tuesday could affect team selection: “they got a good result last week, but there’s still another game to be played. It would be a mistake though to think that they won’t put out a strong team. They’ll be coming to compete and take the title. Del Nido says he has the best squad in Spain”.

With the transfer window coming to a close, Guardiola refused to rule out any new signings. Although he wouldn’t reveal what position he was looking for a new player to fill, he did admit that he had made a request for a specific player: “somebody might come along. If not, we are 19 in the squad plus three, four, five, six, seven or eight players from the B team I can use”. 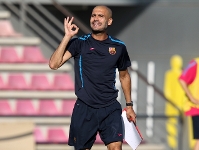 Guardiola insisted though, that he is happy with his squad: “I’d rather have 24 players, but I don’t want to take players on just to make up the numbers. We’ve got 19, and we’d normally have 23 or 24, but that means you’ve got 11 or 12 who aren’t playing. My feelings about the new season are positive –I think we are going to have a very good season, but, you know, I still need a bit more time to become a fortune teller!” 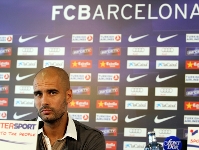 A lot of Guardiola’s press conference focussed on the youngsters from the B team and he revealed that none of them would be coming into the first team squad just yet, but that he would bring them in on a game by game basis.

However, the boss didn’t rule out changing the situation in the winter, when the Spanish Cup starts to get tough: “I won’t be keeping any of them in the squad as such, though maybe we’ll bring them in during the winter transfer window, because if we start to rest players then I may not have enough players to compete on all fronts”.