Pep Guardiola had to take training with five less players from the youth ranks on Thursday morning as FC Barcelona’s B outfit had a friendly as they too continue preparations for a challenging campaign ahead.

The Blaugrana boss has utilised many of the rising starlets throughout the pre-season, but they are now required by B side boss Luis Enrique for a game against Sabadell at 20:00 in the Miniestadi on Thursday evening. Andreu Fontŕs, Víctor Vázquez and Oier Olázabal have remained with the first team squad, however. 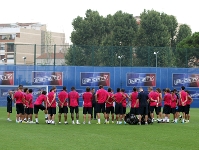 That has meant that 27 players participated in training on the pitch at the Ciutat Esportiva Joan Gamper complex with 22 first-teamers and five youngsters.

Goalkeeper José Manuel Pinto rejoined the squad after working alone for the past few days. The former Celta custodian missed the first leg of the Spanish Super Cup against Sevilla with a muscle injury, but is hoping to be available for the return encounter this Saturday. 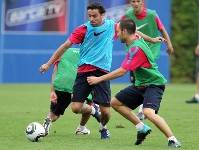 After the usual warm-up exercises the squad was Split into two groups- One worked on tactics and strategy the other worked on attacking play with shots at goal, crosses and one-against-one’s being the order of the day. 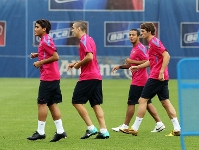 Pep Guardiola’s players will train against on Friday morning in a session behind closed doors that starts at 09:00. The coach will then attend a press conference to look ahead to the visit of Sevilla.