“Ambition is one of our characteristics”

“Ambition is one of our characteristics”

Six days after returning to training, Sergio Busquets gave his first press conference and stressed that the players will not be resting on their laurels after the astounding successes of the last couple of seasons.

Speaking to reporters on Wednesday morning, Sergio Busquets confirmed that he feels fit enough to take part in the second leg of the Spanish Super Cup in the Camp Nou on Saturday. 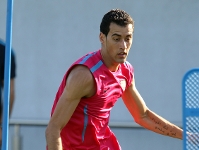 He also emphasized that the squad has the same hunger for silverware as ever. “Last year we demonstrated that winning titles doesn’t make us drop our guard. We always go out to win”. Right now he believes the players have to focus on Saturday’s game against Sevilla and win the first title of the season.

Reserves ready to step up

At the moment, Busquets is the only central defensive midfielder in the senior squad. However, today he denied that makes him an automatic choice in the starting line-up and also sang the praises of his counterparts in the reserves: “Oriol Romeu is very strong and doesn’t lose possession much. He’s a very complete player and makes good cover”. As for Dos Santos, Busquets defines him as a more attacking player, similar to Xavi or Iniesta.

Size of the squad 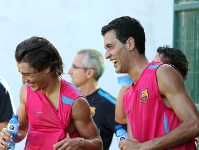 This season, Barça has a senior squad of 22 players, which some pundits have suggested could be a bit short on numbers. However, Busquets doesn’t see it that way: “If we avoid injuries we have a really good squad and if not we have some quality reserves that we can rely on”. 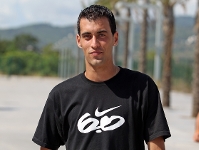 Finally, Busquets was decidedly upbeat when one reporter suggested the players could face an accumulation of matches this season: “I hope there are a lot of matches and that it’s a tough season because that will mean that we’re doing a good job”.