The preparations for the return leg of the Spanish Super Cup continued here in Barcelona on Wednesday morning. Belarus international Alexander Hleb rejoined the main group after missing the last few sessions with a foot injury.

Some 30 players were able to take a full part in the training session on Wednesday morning – 21 from the senior squad and 9 from the reserves. Meanwhile, number two goalkeeper José Manuel Pinto continued his recovery from injury separately from the main group.

Hleb back in training 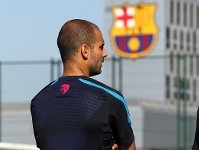 Belarus international Alexander Hleb, who has been exercising recently in the gym due to a problem with his right foot, was able to rejoin the rest of his team-mates this morning. This means that manager Pep Guardiola now has 21 players from the senior squad available for next Saturday’s second leg of the Spanish Super Cup. 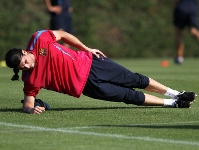 However, José Manuel Pinto has still not made a full recovery from his muscle injury and worked separately from the rest of the players under the watchful eyes of one of the Club’s fitness coaches.

The session consisted of the usual ball control exercises followed by a number of circuits to improve strength and stamina. 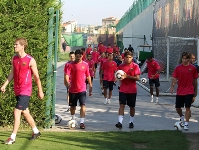 As occurred on Monday and Tuesday, the senior players were joined by a large group of youngsters from the reserve squad. This morning, goalkeeper Jordi Masip was added to the by now familiar faces of Mińo, Oier, Fontŕs, Sergi Gomez, Oriol Romeu, Jonathan dos Santos, Thiago and Victor Vazquez. 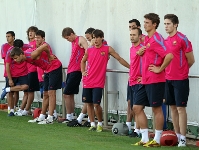 Next session on Thursday

The next training session is scheduled for Thursday at 9 am. It will be held behind closed doors. The session will be followed by a press conference with Gerard Piqué.