The eight FC Barcelona players that won the World Cup last month trained on Tuesday evening alongside Lionel Messi, Éric Abidal, Martín Cáceres and a selection of players from the club’s impressive B team.

After returning from a late holiday earlier this week the Spain stars are working hard to rediscover their rhythm and fitness as the rest of the squad are some time ahead of them in the schedule.

Eight and seven others 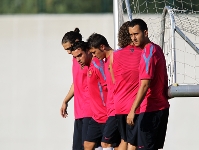 While the remainder of the squad had the evening off the World Cup winners were put through their paces Víctor Valdés, David Villa, Sergi Busquets, Pedro, Andrés Iniesta, Carles Puyol, Gerard Piqué and Xavi were joined by the youth team starlets.

Goalkeepers Oier Olázabal and Rubén Mińo were joined by Andreu Fontŕs and Víctor Vázquez as coach Pep Guardiola continues to look to give the young players more and more experience at the highest level. 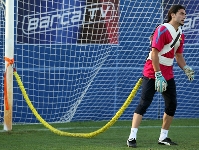 José Manuel Pinto worked on his own once again as he looks to recover from a muscle injury that kept him out of the first leg of the Spanish Super Cup encounter with Sevilla at the weekend. 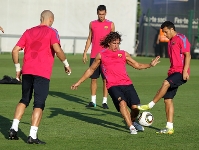 Éric Abidal is is the only of five players not to be punished by the French Football Federation’s Disciplinary Committee.The FC Barcelona defender attended a hearing in Paris on Tuesday into the France squad’s behaviour at the World Cup Finals and several players were castigated. Nicolas Anelka was given an 18-match suspension, while Patrice Evra cannot play for his country for five games, Franck Ribéry for three matches and Jérémy Toulalan one encounter. The Committee chose not to punish Abidal after taking his explanation into account.