FC Barcelona’s squad have had the first official photograph of the new season taken as all the new signings were present along with eight youth team starlets.

The photo was taken for UEFA as the group met at 08:00 on the pitch at the Ciutat Esportiva Joan Gamper training complex as they came out of the dressing room donning the new look kit. 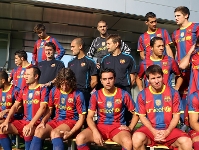 Along with the team group photo all the players were required to pose in front of the lens individually in order for UEFA to maintain a library of the club’s stars. While the majority of the players have been through the process before both David Villa and Adriano were experiencing it all for the first time after joining in the summer. 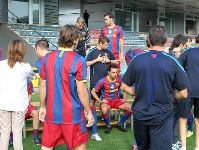 Éric Abidal was not able to take part after he was called before the French Football Federation’s Disciplinary Commission and Aliaksandr Hleb did not also not have his photo taken due to his contract situation. 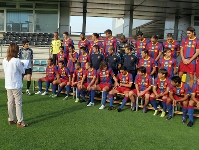