Zlatan Ibrahimovic returned to training on Monday after recovering from a throat infection and continued preparations for the second leg of the Spanish Super Cup against Sevilla.

Josep Guardiola’s Barça squad took to the pitch at the club’s Ciutat Esportiva Joan Gamper training complex as the players continue to find their fitness and rhythm during pre-season. With intensity still the key, the Swede made his comeback after missing training on Monday after he was diagnosed with pharyngitis. 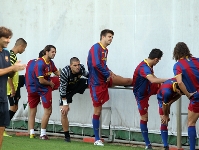 Aliaksandr Hleb continued his own fitness programme in the gym as he tries to recover from a foot injury while goalkeeper José Manuel Pinto worked apart from the squad after returning to action on Monday. Éric Abidal was also not present as he was given permission to travel to Paris to attend a hearing in front of the French Football Federation’s Disciplinary Committee. 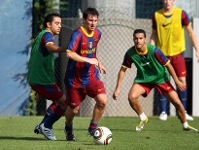 After the usual warm-up routine the squad participated in a circuit to increase their speed and agility that concluded with a shot at goal. An exercise designed to focus on maintaining possession then took place.

The players that won the World Cup with Spain will have a second session at 19:00 along with Martín Cáceres, Fontŕs, Vázquez, Lionel Messi, Abidal, Oier and Mińo. 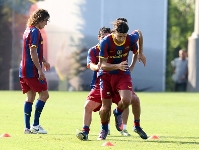