Difficult, but not impossible

Difficult, but not impossible

It won’t be easy for Barca to come back from the 3-1 defeat against Seville, but a quick look at the stats show that 25 of the results between the two at the Nou Camp in the league would be enough to give Guardiola’s men their 1st title of the season

Coming back from a 3-1 defeat with a squad who are clearly not yet 100% will never be easy, but Barca can take heart from previous results between the two – many of which if repeated would be enough to give Barca the title.

25 of the 65 results between the two at the Nou Camp would be enough to overcome the 3-1 defeat last Saturday, whilst 10 would force extra time.

Of the 12 results in the Cup competition, Barca have had results in seven which would give them the title.

Never come back from behind before

Barca have had to come from behind on three occasions in the Super Cup and the bad news is that they have yet to achieve success. In 1988 they lost 2-1 against Mallorca in the first leg, in 1993 they went down 3-1 at the Bernabeu, the same result they suffered against Atletico Madrid in 1985. 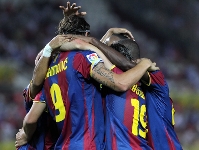