Adriano: “We can put in a good game at home”

Adriano: “We can put in a good game at home”

Despite the disappointment of a defeat on his return to the Sanchez Pizjuan, Adriano Correia reckons the team can turn the tie around next week at the Nou Camp.

“We have to be clear in our minds that we can turn this around. Everything is possible. Barca have turned around games like this before. They put in a good second half tonight and we know we have to work hard and I’m sure we can put in a good game at home”, according to the Brazilian who came on for the last 10 minutes of the game and expressed himself, “very happy with the way the fans received me”.

Below are the post match declarations of some of the other players: 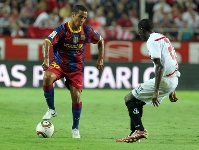 “I felt good, but it’s not good to come on and see the team lose”.

“Although we were a lot of new players, we were up to it. It’s all down to the return game next week. We just have to look to that”.

“We have to ensure that the ball flows more freely in the game next week and take our chances, but we can’t take it away from Seville who played well today and deserved the win”.

“The heat and tiredness affected us and they pressed a bit more in the second half, but there are 90 minutes still to play”.

“I feel comfortable in either midfield position. My natural role is more attacking, but I feel okay further back too”.

“We’re still young, but we want to win”.

“I don’t know anything about whether I’ll stay with the first team. I just work hard every day”.

“I was a bit nervous at first, but I just got on with my job. It was a pity we couldn’t get the win”. 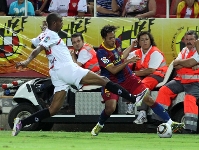 The squad will be back in training on Monday afternoon at 19.00 at the Ciutat Esportiva, with David Villa due to speak to the press at 18.00.