Speaking to the press on Saturday night, Josep Guardiola reckons that his team deserved more from the game at the Sanchez Pizuan and “paid a rather high price”, given how they performed overall.

Although Seville turned the game round in the second half, Guardiola expressed himself: “very satisfied” with his team,”we tried and showed that we wanted the win. In general, my older players and the youngsters all played a good game. We paid a rather high price considering how the game panned out”.

Control lost in second half

Guardiola did accept, however, that his team failed to control the game over the full 90 minutes: “after the break we didn’t have the control we showed in the first 45 minutes and I think that tiredness may have played a part. We weren’t able to bring the ball out well from the back and when Seville go down the line they are very strong. They are a forceful team who showed that they can do things well”. 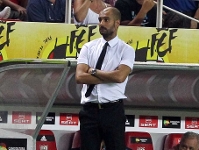 There’s still 90 minutes to go in the fixture though and Guardiola insisted: “it’s not a good result, but at least we scored and that is always positive. We will have to play well next week to beat them”.

Quizzed as to the chances of his Spanish internationals being fit for next week, Guardiola was cautious: “we’ll have to see how they train this week and then have a look at them. Some of them might come in, but not all of them I don’t think. We’ll see what happens”. 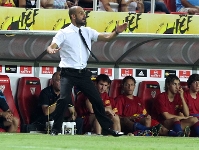 The boss showed his satisfaction with the five B team youngsters who played, claiming they all played:”well” in general, adding, “this will make them grow – we’ll continue to prepare them for the coming season”.