Barca’s Spanish World Cup winners were in training at the Ciutat Esportiva at 09.00 this morning, as they fight to get back to full fitness and catch up with the rest of the squad, who’ve been training since mid-July.

The World Cup winners, along with the Uruguayan Martin Caceres, who reached the third/fourth place game in South Africa, put in an extra session this morning and will be training with the rest of the squad this evening 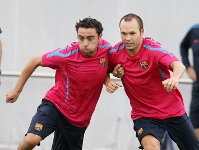 After warming up well, all the outfield players did some circuit training, with Piqué-Puyol, Pedro-Villa, Xavi-Iniesta and Busquets-Cáceres paired up, whilst Valdes worked on specific goalkeeping points with Carles Busquets - the first time the Spanish keeper has trained with the new keepers’ coach.

The players will have been grateful for the mild temperatures in training as the thermometers at the Ciutat Esportiva registered just 21şC, following yesterday evening’s storms which have cleared the atmosphere in the city.