The return of the World Champions

The return of the World Champions

The seven Spanish internationals are back from Mexico and on Thursday evening took part in their first training session. Uruguayan international Cáceres also joined the session. 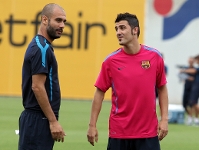 For David Villa , it was his first training session as a Barça player, almost three months after moving from Valencia. The eight Spanish internationals posed for a photo before the session got underway – eight Barça stars who reached heaven in Johannesburg.

The group was given a warm welcome by their team-mates and coaches, including Pep Guardiola, who greeted them one by one.

18 from the first team, 14 from the reserves

In total, 32 players took part in the session – 18 from the first team and 14 from the reserves.

Bojan and Jeffren are still absent with Spain under-21s. In addition, Belarus international Alexander Hleb had flight problems and did not arrive back in time. All three players should be available for Friday’s session. 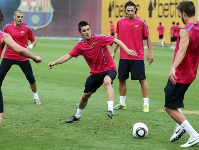 Meanwhile, Pinto exercised in the gym due to the muscle injury he picked up in training on Wednesday. Fellow keeper Oier is still recovering from bruising to his right ankle. Barça B goalkeeper Jordi Masip was added to the group that trained on Wednesday. 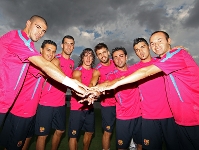