Adriano goes back to the S·nchez Pizjuan

Adriano goes back to the S·nchez Pizjuan

Adriano looks set to make his competitive debut with BarÁa on Saturday after taking part in all three matches so far this summer. If so, it will be a quick return to the S·nchez Pizju·n for the versatile Brazilian.

Curiously enough, he made his first appearance in the Spanish league in a match between Sevilla and BarÁa on 29th January 2005. And now, five years later, he could make his competitive BarÁa debut in the first leg of the Spanish Super Cup in the S·nchez Pizjuan. 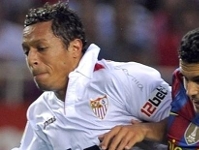 Adriano won the Spanish Super Cup in 2007 against Real Madrid. But it is just one of the six medals he won during his more than 200 matches with the Andalus club. He’s hoping he can continue – and improve – his winning streak with BarÁa and on Saturday he may get the chance to take the first steps towards his seventh medal in a tournament that BarÁa has already won 8 times.

Adriano can expect a warm welcome from the Sevilla fans and his former team-mates but as soon as the referee starts the match no doubt Adriano will be focussed on the interests of his new club.

Following in the footsteps of Alves and Keita 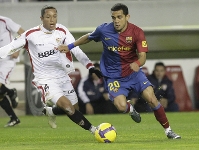 Team-mates Dani Alves and Seydou Keita, also former Sevilla stars, had the same experience in the 2008/09 season when, in November, they returned to Sevilla as BarÁa players. That day Leo Messi produced a scintillating performance to guide BarÁa to a crushing 0-3 win. 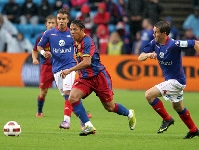 Adriano has featured in all three matches so far this summer. Against Valerenga, he came on for the second half in place of Maxwell. Then, in the first match of the Asian tour, he played the opening 30 minutes while last Sunday he played for the first half of the match against Guoan. Adriano has definitely demonstrated his versatility and the reason he was brought into the Club.