FC Barcelona have the chance to move ahead of Real Madrid in the number of Super Cup triumphs both clubs have by beating Sevilla in this year’s two-legged tie.

The Blaugrana and Los Merengues have both won the cup on eight occasions each since it was inaugurated in 1982, but now an outright leader could be proclaimed. Barça’s rise has been helped by four wins in the last decade as Frank Rijkaard and Pep Guardiola steered the club to glory. 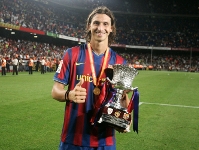 Barça are the reigning Copa del Rey champions after beating Athletic Club 5-1 on aggergate last year as they added the pot to the league, Copa del Rey and Champions League treble.

In 1998 the Catalan outfit competed for the Super Cup as domestic double winners, but lost to Real Mallorca. Those two games, which the Balearic outfit won 3.1 on aggregate, saw a young Xavi Hernández make his debut for the Barça first-team and score one of the goals.

A derby and three clásicos 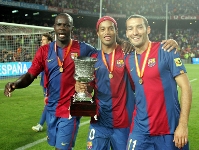 There have been a derby and three clásico encounters in the Super Cup Final. Against Espanyol the Blaugrana won 4-0 on aggregate, while Real Madrid have proven to be Barça’s bogey side in the competition as they have won the trio of meetings between the clubs.


FC Barcelona’s most common foe in the pre-season tie have been Atlético de Madrid with the sides meeting four times. Barça have won three of those and Atleti one with the last meeting coming in 1996 when the Camp Nou club won 6-4 on aggregate as Ronaldo made his debut. 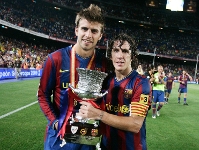 Barça have competed in the Super Cup on 15 occasions and have scored no less than 82 goals in the 30 matches, an average of almost three per game. The biggest win was a 5-2 triumph against Atlético de Madrid in 1996 and the biggest scoreline was a 4-5 defeat against Real Zaragoza in 1994 in Camp Nou.