Iniesta: "My objectives are collective"

Iniesta: "My objectives are collective"

Andrés Iniesta has revealed that he is only concerned about helping FC Barcelona to more glory and is not interested in any individual awards that may come his way in the new season.

The Blaugrana midfielder scored the goal that won the World Cup for Spain last month and is now back in training with Pep Guardiola’s side after being left out of the squad for the latest international friendly. 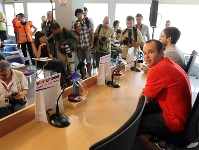 Looking ahead to the new campaign Iniesta explained that his main aims are to help the team succeed and not to try and play well in order to be in line for any player awards. “My personal objectives are collective objectives,” he said. “Winning trophies is what makes me happy, it’s what makes the fans happy and is all there is. Individual prizes are not important. Barça continuing to win things is important and what will make everyone happy.” 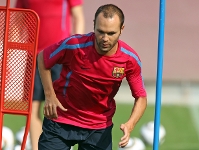 Barça meet Sevilla in the first leg of the Spanish Super Cup on Saturday, but Iniesta is behind in pre-season after his late holiday. “I am doing well and am doing everything in order to continue to find my fitness slowly but surely,” he continued. “Some of my team-mates are ahead in training having been back for longer and they are in better form. Now I am just another squad member and it is up to the coach to decide if I play.” After injuries saw him miss several games last season Iniesta is looking forward to the new campaign. “It was hard, but I will start with more desire than ever,” he insisted.

On the subject of strengthening the Barça squad further Iniesta explained that there is the option of promoting from within. “We are lucky to be able to count on so many players from the youth ranks that are capable and have so much quality,” he said. “If a player comes from elsewhere he will be welcomed, but with this youth option we can remain calm.” 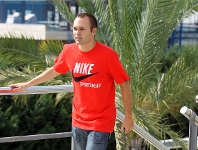 Last Sunday marked one year since Espanyol captain Dani Jarque tragically passed away and among the dedications made to him was a large photo of Andrés Iniesta’s message on his t-shirt after scoring the World Cup-winning goal. “I did it because I felt it deeply,” he explained. “It showed that what is more important than rivalry, your team or your colours is to be human and a good person. I am delighted because it was the most important moment in my career.”