With eyes set on Saturday’s Spanish Super Cup first leg against Seville, Pep Guardiola trained for the first time since the return from Asia with a total of 21 players – just 8 from the first team squad and 13 from the B team.

After an intensive week on Tour in Korea and China, the first team squad were back home and in training this evening - just 36 hours after landing in Barcelona.

The rest of the B team players who went on the Asia Tour will train this week with B team boss Luis Enrique, whilst Guardiola will work with the players he had today for the rest of the week.

The team will train at 9.00 and 19.00 on Wednesday and Andres Iniesta will speak to the media after the morning session. 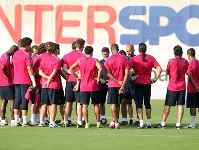 There were two special guests at this evening’s session with Sporting Director of Professional Football Andoni Zubizarreta and Mazinho – the father of Thiago Alcántara renewing the friendship they had when they both played for Valencia between 1994 and 1996.

The ball used in training was the ‘Jabulani’ ball used in the South African World Cup, which will also be the one to be used in Saturday’s Super Cup game against Seville.