Two to meet for the first time in Super Cup

Barca and Seville will fight it out for the first trophy of the season over the next fortnight, with the Spanish Super Cup up for grabs. This will be the first time the two have met in this competition.

The first leg of the tie will be at the Sanchez Pijuan this Saturday and it will be the first time the two have met in what is the youngest Spanish competition, which was first staged in 1982, though Barca have played 15 times in the season’s curtain raiser and Seville just the once before this year, in 2007.

Kings of the Super Cup 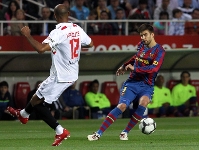 Barca are the team who have played most times in the competition, but with mixed fortunes, having won eight times and lost seven, whilst Seville’s only appearance was in 2007, as Cup winners, when they beat Real Madrid in a season which saw Juande Ramos’ team lift a total of four trophies. 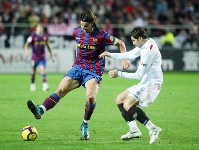 Nine wins out of 12 in two-legged ties

In two-legged games, Barca have beaten Seville on eight of the eleven times the two have met in the Spanish Cup. On the only occasion they clashed in the old UEFA Cup in 1996, the Catalans also came out on top, though Seville did beat Barca in the European Super Cup in 2006, which is not a two-legged tie.