Andrés Iniesta reported back for pre-season on Monday and underwent the usual medical tests before heading to the training ground to begin his first session of the campaign back at FC Barcelona.

At 09:00 the midfielder's holiday drew to a close as he arrived at the Medical Services area at Camp Nou to start his 2010-11 campaign with a series of exams to test his strength and fitness. 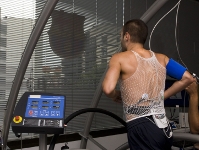 Four weeks after scoring the winning goal in the World Cup Final for Spain before celebrating in style Iniesta showed that he not enjoyed his summer break too much as he showed that he is in prime condition.

Like all his team-mates that playmaker underwent weight, heart, fat and cardiac tests to measure all manner of physical levels and he flwe through them all and then headed to start training on his own as the rest of the squad jet off to play in international friendlies or recover from the trip to Asia.

Eight Barça players were in the Spain squad that won the World Cup and Iniesta is the only one not to be called up by coach Vicente del Bosque for the first international game of the new season. The other seven stars have all reported for duty with La Roja before flying to Mexico where they will play in the Azteca.

After passing the medical exams Iniesta will start training on Monday afternoon at the Ciutat Esportiva.