Pep Guardiola returns from the Asia Tour with positive feelings, happy with his team’s performances and especially the response from the Barca B team youngsters.

Speaking after the 0-3 win over Guoan, Guardiola declared: “I know the B team youngsters well and all in all the Tour has been very positive. It’s a pity that Cristian Tello picked up an injury in training yesterday. We have trained hard and worked well. We have a good group of young players and I really can have no complaints. Now we are off home to prepare for next week”. 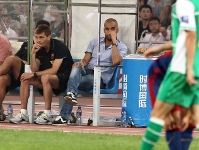 The only negative for Guardiola was the state of the pitches in Korea and China: “it’s a pity they were in such a state they are impractical and it’s not good to play in such conditions”. The Bird’s Nest pitch cut up from the start and Guardiola explained: “it’s hardly been used for three years and the Stadium’s virtually been closed. All we ask is that the pitches are usable. There was a risk of injury out there and I’m happy that no one actually did pick up anything. Nowadays, you have to balance sporting and commercial interests. There’s no point complaining too much, we just have to adapt, but I’m making these comments so that maybe we can improve this aspect in the future”.

Confidence in the squad

As to any more summer signings, Guardiola was non-committal: “the market is still open, we’ll look at what is available, but we are in no hurry. I’m sure we are in for a good season because we have plenty of good players and we can compete in all the competitions”. 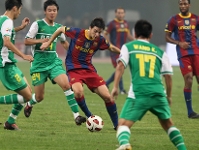 Guardiola once again stressed his confidence in the club’s own young players: “I know these lads and when we were in the third division, not all of the players had the capacity to play in the top flight, but Pedro and Busquets came through. Right now we have a generation who are not necessarily any better, but there are more of them coming through”.

Even so, the boss is aware of the dangers of pushing too hard: “we have to protect them as much as possible and let them grow. They still have space to improve and they can help us a lot throughout the year. The most important thing is that they have the quality and we are happy with that. They just need to learn from the players in the first team squad”. 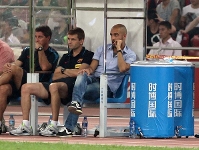 Guardiola also spoke of Cesc Fabregas and insisted: “I understand why Wenger doesn’t want to let him go, I’d probably do the same myself. All I can say to Cesc is that he should continue to enjoy playing in such a great league as the Premier”.