S. Roberto and Nolito get on the scoresheet

S. Roberto and Nolito get on the scoresheet

Sergi Roberto and Nolito scored their first goals for the team in the Beijing game on the unforgettable stage that is the Bird’s Nest Stadiums.

Today’s goals mean that 9 players have been on target in Barca’s pre-season so far: Messi (2), Víctor Sánchez (2), Ibrahimovic (2), Maxwell, Benja, Keita, Jonathan, Sergi Roberto and Nolito. That means Barca have scored 12 goals in their four games – an average of four a game.

More stats from the game:

- Of the 12 pre-season goals, seven have been scored in the first half and 5 in the second. 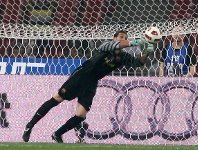 - Pinto, who made a series of good saves, played the whole game, whereas in the previous two games Guardiola had made changes. With Valdes in the Spanish squad for Wednesday’s friendly on Mexico, Pinto looks a safe bet to start the Super Cup game against Seville.

- Víctor Vázquez made his debut, playing a total of 45 minutes.

- Abidal played at centre half in the first half, a position he may well be forced into next weekend with Puyol and Pique still to train with Barca this pre-season. 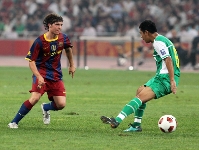 Each of Barca’s goals was accompanied by the Barca hymn booming out over the stadium P.A. A large section of the crowd accompanied the song with chants of ‘Barça!’ ‘Barça!’, whilst others replied shouting: ‘Madrid!’ ‘Madrid!’.