Centre halves ready to step up

Centre halves ready to step up

With the departures of Chygrynski and Marquez, Pep Guardiola will be looking for replacements at the heart of the defence and his first option is to dip into the Barca B squad, where Andreu Fontŕs, Sergi Gomez and Marc Muniesa are ready made replacem

As Andoni Zubizarreta and Guardiola himself have both made clear, the replacements for the two internatiuonal centre halves will have to come from inside the club. Andreu Fontŕs, Marc Muniesa and Sergi Gomez have all showed with the Barca B team that they are ready to make the step up to the first team. 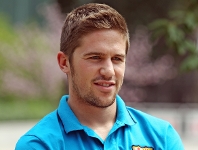 To play at the back for the first team it is vital that a centre half can bring the ball out and Andreu Fontas, the oldest of three at 20, is perhaps the one who most fits the bill, as he explains: “I always played in midfield until Luis Enrique put me on as a left sided central defender a couple of seasons ago. I seemed to settle in straight away. I knew it would be a tough season, as it was my first after coming up from the youth team, but I felt comfortable playing there right from the start”.

Although he is well aware that the current set up of the squad means he’s in line for a call up. Fontas is also clear what role he has to play “two centre halves have left and that gives us a better chance for when a player is injured and we can step up”. 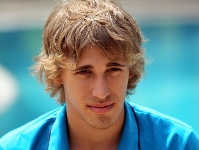 Muniesa made his debut with the first team in the last home game of the 2008/09 season and he still remembers well that opportunity. “I have been here since I was a little child and I never thought I would make it this far, but I’m close to making it and with the two important players who’ve left, I think all the centre halves could get more chances this time around”.

Muniesa sees Pedro and Busquets as examples to follow: “they have gone from the third division to winning everything and being a vital part of the Barca team and the national team in just two years”. Muniesa knows what is wanted from a Barca centre half: •you have to be able to play the ball out from the back and not panic when the ball is at your feet. When you have to defend, you need to be concentrated. I’m trying to fulfil all these requirements”.

Sergi Gómez: great play off brings him into the frame 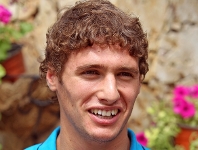 Sergi Gómez is the youngest of the three and he has really come into the frame since his exploits in the Barca B play offs, something he finds hard to take himself: •if you’d have said at the start of last season that I’d even be involved in the play offs, I’d have said ‘no way’ ”.

Pep Guardiola’s commitment to the youngsters at the club is a big boost for players like Gomez, who admits: "we know that we have a chance here at Barca and we always have to be ready. We have the same philosophy of football all the way through the club and that means you play the same way for Barca B and for the first team”. All three youngsters know that this season might just be their big opportunity to prove that. 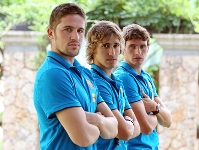 The three players gave their opinions as to how their teammates play:

Sergi Gómez
Muniesa: “He can play as a centre half or as a left back. He brings the ball out well and always takes up good positions, which is very important in a defender”.
Fontŕs: “He’s good in the air and at distributing the ball”.

Andreu Fontŕs
Muniesa: “He’s very fast and brings the ball out well. He’s a good player”.
Sergi Gómez: “He’s just come up from the youth team and he finished the season off really well with a great play off. He’s a tough centre half and nobody thought he would be here, but he’s made his mark.