“We are very happy with the way things are going”

“We are very happy with the way things are going”

Maxwell reckons Barca’s pre-season is going pretty well so far and he’s also pleased with the signing of fellow Brazilian Adriano and the quality of the youngsters coming through from Barca B.

Maxwell is an experienced pro and he knows that the pre-season is vital: “ it’s a time when we know we have to work hard and we are all very happy with the way things are going so far”, he told reporters at Saturday’s press conference in Beijing.

In his first season at the club last year, the pre-season tour went to North America, but Maxwell believes: “it doesn’t really matter where we travel to, we don’t get a lot of time to see the country and this is a period dedicated to getting used to training again”.

Praise for Adriano and B team players 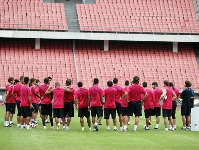 Adriano is Barca’s only summer signing to have started training with the squad and Maxwell is certain that: “his arrival will make the squad more complete – we’ll all have to fight for a place in the team”. The Brazilian also had praise for the youngsters from the Barca B team: “they’ve shown they have the quality to step up if they are needed”.

Barca close their Asia Tour on Sunday at the fantastic Bird’s Nest Stadium, host to the 2008 Olympics and Maxwell is clearly looking forward to the chance of playing at the iconic stadium: “it’s a spectacular place. It’s still very new and it’ll be interesting to get to know it a bit. It’s always a pleasure to play at places like that”. As to the game itself, Maxwell promised: “we’ll be trying to play attractive football. Guoan are a team who run a lot and mark very closely. We’ll stick to our philosophy of the game though”. 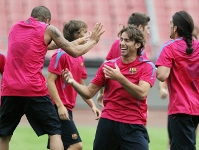