Alves and Hleb both had to delay their exit from China due to bureaucratic problems, which meant they were able to take part in Saturday’s training, Fontas was also present after being given the medical thumbs up, but Tello picked up an injury.

Alves and Hleb had hoped to be on their way to join up with their national teams, but problems with their exit visas meant that they had to postpone their flights, with Alves flying out to the States on Sunday morning and Hleb now taking a flight to Minsk via Frankfurt late on Saturday night .

Fontŕs back, but Tello out

With all the players he brought on Tour available to train, Guardiola gave the squad plenty of ball work and a practice match at the end of the session which was well received by the 150 or so fans who had come to see the training session, especially whenever Messi or Ibra got the ball.

The good news was provided by Andreu Fontas, who was finally able to train normally after club doctors declared him fully recovered from the broken metatarsal he suffered three months ago, but the other side of the coin was the injury to Cristian Tello who tore a muscle in his right leg and will be out for between three and six weeks. 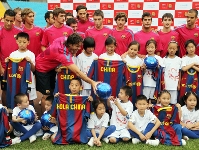 Before training, the squad joined in an event organised by Audi and UNICEF with 22 Chinese children who were orphaned during the 2008 Wenchuan earthquake.

The children had a fun training session alongside the players. First off they practiced shooting at a goal split into 9 different spaces, with points for each one. The child with the most points won the coveted prize of a signed Barca shirt. After a ball slalom with the squad, the children had their photos taken and presented Guardiola with pictures they had drawn specially for the occasion. 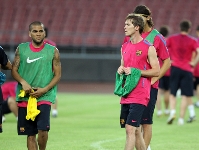