With Pep Guardiola desperately short of players from next Monday, Keita brought the boss some welcome good news when he announced he’d agreed with the Mali coach to miss his country’s international game next week.

Guardiola is going to have to prepare for next weekend’s Spanish Super Cup with a skeleton squad, but at least he can count on his African midfielder, who revealed: “I spoke with the coach and I said I’d be staying in Barcelona when we return from China, because going to play in Marseilles next week would be too much”. 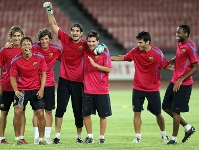 Even with Keita’s presence confirmed, Guardiola will have just 9 first team players to start the week’s preparations for the first trophy of the season - Pinto, Milito, Maxwell, Abidal, Adriano, Víctor Sánchez, Keita, Iniesta and Martin Cáceres, with these last two arriving back from holiday on Monday.

“I hope they don’t come back injured”

The massive call up of internationals before some of them have even been able to start pre-season training, is as baffling to Keita as to most of the Barca party in China and he echoed many a worry when he commented: “I just hope they don’t come back injured”. Even without the missing players though, Keita stressed Barca would go into the game with a positive attitude: “we’ll try and beat Seville. I’d have preferred that all my team mates were available of course and it won’t be easy, but we’ll be going out looking for a win”. 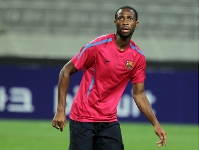 With Touré transferred to Manchester City and Sergio Busquets still not back in training, Keita looks likely to take over as defensive midfielder: “if that’s where the boss wants me to play, there’s no problem. I’ve played there in a friendly and I did that job last season at times”. He also admitted though, that playing further back meant his goal scoring chances (he bagged six goals last season) would be limited: “when I play as an inside forward, I can get into the box more easily and score goals”. 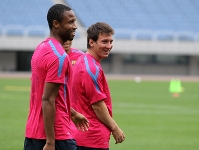 Keita is also unfazed at the tremendous media circus surrounding Leo Messi in China: “it happens all year round. He’s the best player in the world and for us, all the attention is normal”. 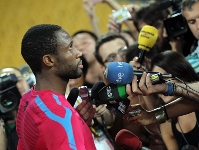 Pre-season tours are an opportunity for sponsors to organise marketing events with the squad and Herbalife organised a get together of players and fans at the club’s hotel, in which the whole squad took part, autographing balls, shirts and other items.