Alves pleased to be back

Alves pleased to be back

Dani Alves was pleased to be back in action for FC Barcelona as he appeared in the team’s 2-5 victory over a K-League Select XI in South Korea on Wednesday.

“I felt good in the few minutes that I had,” the Brazilian international said. “I do not intend to make things difficult for myself and will continue to build myself up.” Alves only returned from a late holiday last week after his participation in the World Cup Finals and has taken part in a handful of training sessions. 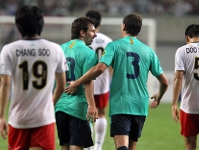 After entering the game in Seoul on the half-hour mark for compatriot Adriano he had a hand in Barça’s second equaliser when he found Lionel Messi on the left and the Argentinian went on to score. Alves was then withdrawn at the break, along with Messi, and replaced by Albert Dalmau.

Messi impressed during his quarter-of-an-hour on the pitch as he scored twice. “He is capable of winning a game in only a few minutes,” Alves continued. “It is a privilege to have him. We should enjoy seeing him here.”

Below is what some of the other players had tos ay after the game. 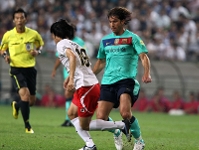 “The pitch was not very good, but it was a positive test. Playing is always important.”

“Adriano brings a lot to the team. He has not played much, but he has shown intensity and quality.”

“It only takes Messi a few minutes to make the difference. He is impressive and is fundamental to us.”

“It was a difficult game as they had some quick players. But once we took the lead we did not have many problems.”

“From the moment we went out there it was like a sauna. It was difficult to play in those conditions.”

“I felt assured and very calm. With the first team we play like we do with Barça B so there were no problems in adapting.”

“It was a tough game from the point of view of the climate because that much humidity makes things physically difficult.”

“We are used to seeing Leo do these things, but they are very difficult.”

“It was difficult to adapt to the humidity, but we worked hard and we continue to progress in pre-season.”

“My team-mates and coaches have made adapting easy. To be part of this is spectacular.” 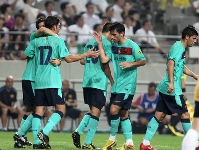