FC Barcelona played a K-League Select XI in front of 32,581 spectators in the Seoul World Cup Stadium in the country’s capital on Wednesday.

The absence of Spain’s World Cup winning players from the squad may have dampened interest slightly, but the fans that did attend were able to enjoy a cameo from Lionel Messi as he came off the bench to score twice in a 2-5 win for the visitors. Below are a number of anecdotes from the Blaugrana’s second pre-season friendly. 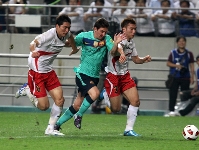 -Messi and Dani Alves made their first appearances in pre-season while Adriano made his first start for the club.

-Éric Abidal captained Barça in the second half of the match almost exactly three years since he made his first appearance in a Barça shirt, which was a 0-3 victory in Beijing. Gaby Milito was skipper in the first period.

-Víctor Sánchez is Barça’s Barça’s top goalscorer in pre-season after he bagged his second. Jonathan Soriano netted his first goal for the FC Barcelona first team.

-Messi was given an award as Man of the Match while Zlatan Ibrahimovic was given a prize for being the most competitive player.

-The Barça team warmed up on a small pitch next to the dressing room where artificial grass has been laid to avoid spoiling the field outside. Only the goalkeepers actually did their pre-match exercises on the playing surface.

-Two people jumped onto the field of play in the second half and both were caught and removed by security guards.

-At kick off time the temperature on the pitch was 30 degrees Celsius and the humidity was 80 per cent. 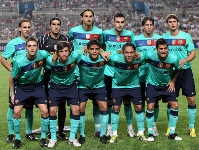 -Barça played their first game in the new green away shirts. It is the first time the side has donned the colour since 1997.

-The players took to the field wearing blue shirts that had the message ‘Infinitely yours, Seoul’ printed on the front to promote tourism to the South Korean capital.

-Before the game there was a video promoting Catalunya in which Barça stars such as Bojan Krkic, Xavi and Andrés Iniesta featured.

-One of the stands in the stadium was occupied mainly by people wearing green shirts to promote the brand Herbalife, a sponsor of FC Barcelona. 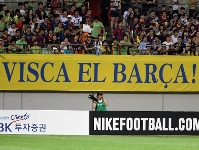 Pep Guardiola has now fielded 25 players in the first two pre-season friendlies. Lionel Messi, Daniel Alves and Éric Abidal all made their first appearances of the campaign.