Abidal and Oier, the only two ‘survivors’

Abidal and Oier, the only two ‘survivors’

Barça are back in Asia for a pre-season tour after two summers in the United States. Surprisingly enough, only two players, Abidal and Oier, were here in 2007 when the team last visited the Far East.

Naturally enough, holidays, international commitments and injuries often cause players to miss out on the Club’s summer tours. This year, the World Cup, especially the fact that no fewer than eight members of the Barça squad were called up by Spain manager Vicente Del Bosque, has affected the summer tour even more than usual. In addition, Bojan and Jeffren have also been included in the Spain under-21 squad.

Add to this the many changes that have taken place in the Barça line-up since 2007and it’s perhaps not so surprising that only two of the players who travelled here in 2007 – Abidal and Oier – are repeating the experience. For both players it was a memorable tour back in 2007 – they made their Barça debuts in Beijing on 4th August 2007 in a friendly against Beijing Gouan ( 0-3 ). This time round a match has also been scheduled against the Chinese outfit.

Memories of the debut 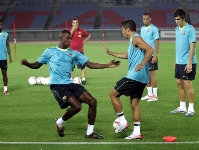 Abidal and Oier had both just joined Barça from Lyon and Irun, respectively. Abidal told us: “It was my first year with Barça and I remember that everything was happening so fast”. The Basque goalkeeper, who was just 17 at the time, explained that he has particularly fond memories of a certain veteran French international who was twice his age: “I had just arrived. I remember than Thuram was really nice to me”.

For Abidal, now aged 31, the trip is a good time to look back over the last few years: “Since then we’ve won a lot with Barça”. As for the 21-year-old keeper, he has achieved two promotions since then. He joined the Club to play in the third division at the orders of Pep Guardiola and this year, made his second division debut with Luis Enrique. 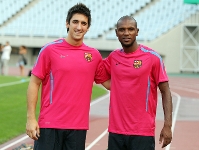 Abidal and Oier are perfect examples of the generational change that inevitably takes place at the Club. The tour squad includes a relatively small group of established first-team stars together with a larger group of young hopefuls from the Barça production line. Fortunately, the harmony between the two groups is perfect. According to Abidal: “The youngsters respect the veterans and we also respect them”.

However, the two players have never played together. On the two occasions that Oier has played for the first team (in Beijing and in the Cup match against Alcoyano in the Camp Nou), Abidal was on the subs bench. And as Oier told us: “I doubt if I’ll play on this tour”. 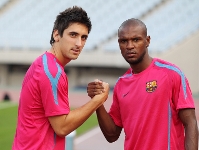 Bojan also joined the first team squad in 2007 but just like now, the young forward couldn’t take part in the tour because he had been selected to play for Spain, in that case the under-17s.

Barça’s Argentine internationals, Messi and Milito, also missed out on the tour in 2007. They were still on holiday after taking part in the Copa America.