Speaking at a press conference in Korea on Tuesday, Guardiola confirmed that he has confidence in the Barça youth system to plug any gaps not filled by new signings. In the specific case of the defence he revealed: The centre backs I have are enough.

He told reporters there are “real possibilities” of completing the team with home-grown players. Referring to the departure of Chygrynskiy and Márquez, he assured everyone that he had cover in depth: “The centre backs I have are enough”.

“The market has stalled” 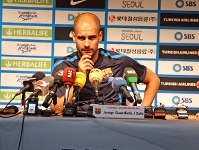 However, he believes there are more options in midfield: “The transfer window closes at the end of the month. We’ll see what options there are. I’m not ruling out that Cesc will, or will not, join us. The market has stalled. If there’s anything to be done, we’ll do it, but if not we’ll use the players from the lower squads because they give us sufficient guarantee”.

Happy with the standard 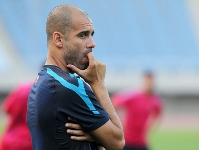 n this context he assessed the contribution of the 17 youngsters who have travelled to Korea with the first team: “Some of them I already know well and I’ve got good references on the others. Whether or not they play doesn’t depend on me – it depends on them. I can give them a chance but if they don’t respond at the right level then they don’t continue. I’m very, very happy with the standard. I’ve got a very good feeling about them”.

The example of Martí Riverola

In fact, Pep Guardiola believes that the youngsters are a tribute the Club’s youth policy. “It’s a good reflection on the whole Club. It represents the success of a lot of people”. He summed up his feelings by giving the example of Martí Riverola, a player he took to Korea and who joined the Football School at the tender age of 5: “That’s a success for a lot of people”.

The internationals and the Super Cup 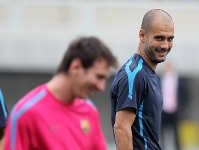 Guardiola is still unsure if he’ll be able to call on his Spanish internationals for the first leg of the Spanish Super Cup as Spain have a friendly against Mexico on 11th August: “I won’t know until I see the squad list. I hope I have at least 7 players from the first team. If there aren’t 7 we can’t play it”. He is resigned to the fact that the Spanish FA has the final say and described the pre-season as “not typical”. 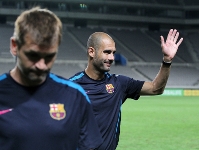