Some 50 underprivileged kids got the chance to meet Leo Messi in a special event at the Mayfield Hotel & Resort in Seoul.

A group of 50 underprivileged children, aged between 8 and 14, who are supported by ChildFund and Sangro kwon as part of the Casa Herbalife programme, had the chance to put their questions to the current holder of the Golden Ball. There were questions of all kinds, from what is the secret of his game, if he’s ever thought of giving up football and what they have to do to be like him. 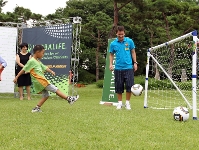 The Argentine star was, as always, patient, courteous and affable. He told the children – all of them aspiring players - that a big part of his success is due to consistent hard work, and assured them that he has never considered giving up the game. He recommended that they spend time playing football and enjoy the sport: “Even if I hadn’t become a pro, I would have played football because I like it so much”.

Leo Messi has a very special link with children, both in his role as a Goodwill Ambassador for UNICEF and through his work with the Leo Messi Foundation. Now he’s also working in the charitable projects of Herbalife, one of his personal sponsors and the nutritional sponsor of FC Barcelona. 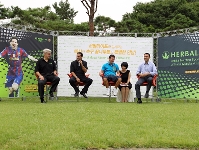 Josep Maria Bartomeu, the Club’s sporting vice-president, also took part in the event. He told those present that FC Barcelona, Messi and Herbalife all care deeply about the welfare of children and highlighted the Club’s collaboration with UNICEF, stressing: “We’re very proud of that”. 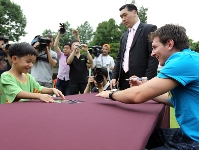 Apart from the questions, the children were excited by the prospect of joining Messi in an improvised kick-about in the gardens of the hotel. And in addition, he gave an autographed photo to each and every child that took part in the event.