Andoni Zubizarreta, the new FC Barcelona director of football, spoke at a conference organized by the K-League to explain the guiding principles of Barça’s hugely successful youth policy.

FC Barcelona have made quite a stir in the world of football by winning the Champions League with no fewer than 7 home-grown players in the team – a rare event in these days of chequebook team-building. In addition, 6 of these players formed the backbone of Spain’s World Cup winning team, exporting the Barça style to the international stage. While this preponderance of home-grown talent is almost taken for granted by Barça fans, other clubs can only look on with envy.

Continuity of style the key 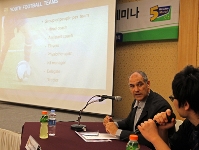 At a press conference in Korea, where the team is on the first lap of their summer tour, Barça football tsar, Andoni Zubizarreta, outlined the policy that has resulted in such a successful youth programme. He highlighted the importance of maintaining the same concept of football throughout the Club and over the years. 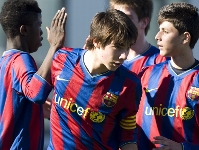 The recently appointed director of football explained that right from the earliest age, the emphasis is always on the technical aspect of the game, so that fitness work, for example, is always carried out using the ball. As the boys get older, a greater emphasis is placed on the competitive element although the coaches always stress that learning their trade is more important than the result itself. He also clarified the kind of personal characteristics the coaches look for in their charges: a global vision of football, modesty, self-esteem, commitment, a healthy lifestyle and responsibility.

He stressed the need for the youngsters to acquire basic footballing concepts in training more than the development of individual skills and highlighted the importance of a creative, attacking approach above any specific system.

The tip of the iceberg 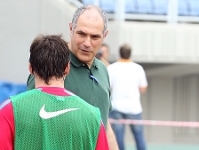 Zubizarreta likened the structure of the Barça teams to an iceberg, where the first team is only the tip. Below that come such important elements as the technical structure, the scouts, the Masia youth academy, the Club facilities, the medical team, the Club’s strategic policy and logistical support and – the hopes and dreams of everyone involved. 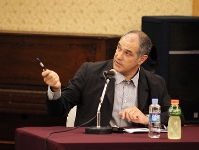 Zubizarreta also explained that the aim is to have the three professional teams (first team, Barça B and juvenil A) training at the same time in the morning. This way, it’s easier to incorporate players from the lower levels whenever necessary.

However, this aim is in conflict with the academic development of the youngsters in the juvenil A squad – something the Club is determined not to prejudice and is working hard to resolve. It’s worth remembering that three of the players who finished as runners-up in the European under-19 championship combine their footballing careers with university.