Hundreds of Korean Barēa fans and the world's media flocked to the airport in Seoul to greet Pep Guardiola's squad after they landed in the South Korean capital.

The distance from baggage collection to the team bus was short but the huge crowd meant that the players were slowed in their progress as they stopped to sign autographs and pose for photos with the supporters. The main attraction was Argentina star Lionel Messi who the media also wanted to ensure they were close to. 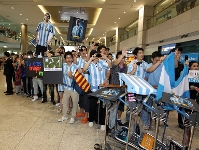 In a hot and heady atmosphere the squad were guided through the throng by security guards while Messi was asked to sign Argentina shirts as the fans swelled around him as he edged his way towards the coach that would take him and the rest of the travelling party to their hotel. 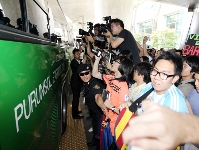 Further behind Messi was coach Guardiola and as all the players boarded the bus the crowd turned their attention to the treble-winning trainer and ensured that he was not going to have an easy path to the vehicle. Some daring fans even boarded the coach themselves to ask for autographs but were quickly ushered away.

Flight TK-3612 landed in Seoul at 13:30 local time with the Barēa squad on board after a 12-hour flight from the Catalan capital. The players were able to watch films, read and listen to music on a plane that was only a third full. 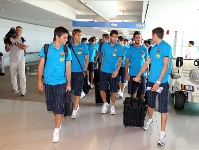 Upon arrival at their Hotel Mayfield base in Seoul the first order of the day was to rest before training was set to begin in the Bucheon Stadium.

Barēa are in South Korea to take on a K-League Select XI on Wednesday in what will be their second pre-season friendly, after the win in Norway against Valerenga last week. 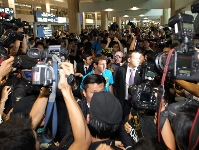