Rafa Márquez leaves after 242 games for the club and the nine facts below sum up his extraordinary time at the Nou Camp.

- Signs in 2003. One of the seven signings made at the start of the Rijkaard era, together with Ronaldinho, Luis García, Quaresma, Rustu, Van Bronkhorst and Mario, none of whom are still at the club.

-242 official games in his seven years at the club. Despite the injuries he’s suffered, he was a reference point for both Frank Rijkaard and Pep Guardiola. Only seven other foreign players have made more appearances than Rafa.

- The first Mexican to play for the first team.

- He made his debut at midnight! Marquez played his first game for the club in the famous game against Seville on 13 September 2003.

-13 goals scored - the majority from free kicks and corners where he specialised in near post goals.

- Marquez is the only Mexican to pick up two Champions League winners medals – in 2006 and in 2009, when a serious injury in the semi final ruled him out of the Rome final. 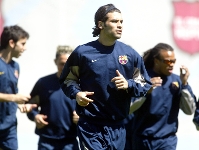