Rafa Mįrquez made his public farewells to the club this evening in the Sala Paris – a fitting location for the adieu of one of the heroes of the 2006 Champions League winning team.

Just after six o’clock this evening, Rafa Marquez, flanked by club President Sandro Rosell, made his appearance in the Sala Paris at the Nou Camp. The Mexican bid farewell to the club where over seven seasons he has become the eighth foreigner to make most appearances.

Meeting with the President 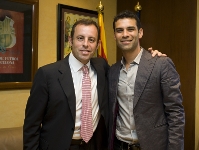 Mįrquez had previously been received by the President in his office and was accompanied in the Sala Paris by Josep Guardiola, club captain Carles Puyol and Andoni Zubizarreta, as well as Director of External Relations Manel Estiarte and the boss of the Football training area, Jordi Mestre, all of them keen to show their respect for the departing Mexican. 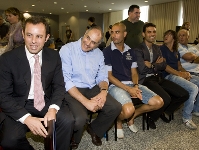 Rafa Mįrquez is not known for wearing his heart on his sleeve, but he was close to tears after his farewell speech when he received a long standing ovation from all present. Mįrquez also admitted that his most special memory at the club was the 2006 Champions League win in Paris and the huge mural celebrating that win on the wall of the Sala Paris proved a fitting backdrop to the farewell of a player who gave so much to the club. 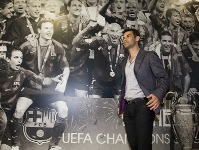 Rafa Mįrquez received a commemorative plaque from President Rosell, with the inscription: “with all our affection and in recognition of the example you gave, your brilliant career, and particularly for your contribution to this club”.