Alves back, Messi due this afternoon

Alves back, Messi due this afternoon

Dani Alves was back with the first team squad this morning, going through a series of medical tests and greeting the rest of the players on his return from his post World Cup break. Leo Messi has his medical this afternoon.

Barca’s international players are gradually making their way back to the Nou Camp after their exertions in South Africa. Last Monday, Eric Abidal rejoined the squad and today Dani Alves and Leo Messi make their reappearances in training. 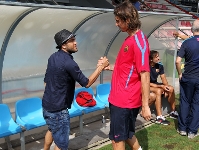 Brazilian Dani Alves began the morning with the medical check up, which all the players go through on their return to pre-season training, before going over to the training pitch at the Ciutat Esportiva, where he was able to greet his teammates, though he took no part in the training session they had been involved in since 09.00.

Messi back this afternoon

This afternoon, Leo Messi will be at the club for his medical check up on his return from his holidays after Argentina, like Brazil went out of the World Cup in the quarter finals. 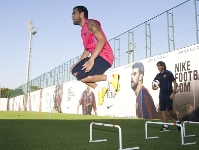 With Alves, Messi and Abidal back in the fold, Guardiola is only missing his Spanish internationals, who won’t be returning until after the Asia Tour.