Messi picked for Argentina on August 11

Messi picked for Argentina on August 11

Leo Messi has been named in the Argentina side to play a friendly with Ireland in Dublin on August 11. The game is just three days ahead of the Spanish Super Cup first leg.

Since his country went out of the World Cup in the quarter finals, Messi has been on holiday until August 1, when the Asian tour commences. Barça have two warm-up games in Seoul and Beijing. When they get back, they have the first of the Spanish Super Cup games against Sevilla on the 14th.

But just three days before the trip to the Sánchez Pizjuán, FIFA has scheduled a day of international friendlies. Leo Messi is the first Barcelona player to be called up, for the game against Ireland in which Sergio Batista will be managing the side in replacement of Diego Armando Maradona. 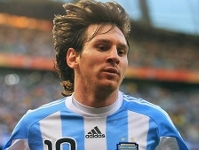