Gio hangs up his boots

Gio hangs up his boots

Ex FC Barcelona player Gio Van Bronckhorst said goodbye to the game as a player in an emotional game this Sunday between Feyenoord and Mallorca (0-1) at the De Kuyp Stadium in Rotterdam.

Giovanni Van Bronckhorst, who played at Barca between 2003 and 2007 bowed out of the professional game this Sunday at the age of 35 in front of his home crowd at Feyenoord, the club where he started his career and where he has played for the last three seasons. Barca board member Josep Ramon was at the game and presented Gio with a token of the club’s support and a personal letter from President Sandro Rosell. 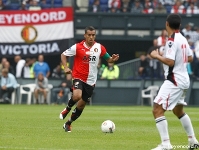 Gio played the first 45 minutes of the game and when Feyenoord boss Mario Been took him off he received a standing ovation from the 45,000 crowd. The ex-Barca man returned to the centre circle, accompanied by his wife and children and waved an emotional farewell to the fans who had followed him since he joined the club as a seven-year-old. As well as playing for Barca, Gio also spent time at Glasgow Rangers and Arsenal before his move to the Nou Camp and he won a total of 15 titles, including a Champions League medal with Barca in 2005/06.

The only negative note for the Feyenoord fans was that they lost the game to Mallorca, thanks to an own goal from De Wrij who deflected in a Nunes header. 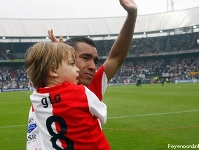 Although the Spanish team frustrated Gio’s ambitions to round off his career with a World Cup winners medal this summer, the Dutch captain will be remembered for his fantastic semi final goal against Uruguay when he beat the South American keeper Muslera with a 35-yard drive that proved to be his last, and maybe his best, as a professional player.