Adriano: “I want to make history”

Adriano: “I want to make history”

Barca’s new signing believes that he has enough maturity to be ”prepared to deal with the pressure“ and reckons his first objective is “to establish myself in the first team”.

Happy and excited about his move, Adriano, who sees his new boss Pep Guardiola as “an example for us all”, spoke exclusively to Barça TV and www.fcbarcelona.cat after his official presentation on Monday.

What are your first sensations as a Barca player ?

“Very good, marvellous! I’ve been in touch with my new teammates and seen the Ciutat Esportiva, now I’m really keen to get started”.

You made your debut as a Seville player against Barca and your last league game for them was also against us. Maybe that was a sign that you would end up here. 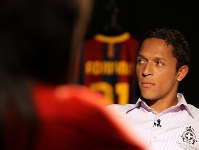 “Yes, it’s curious. I’d never have though that would happen. Now I’m here and very happy and I want to thank everybody who worked hard to make this transfer possible and just go out and give everything I can for the team”.

And now your first game for the team will be at the Sanchez Pijuan in the Super Cup. How do you think the fans will receive you?

“I hope it’ll be the best reception possible. I gave everything to Seville for five years and I wrote my name in the club’s history. We won many titles and to go back there and play them now will be very special”.

Negotiating with José Maria Del Nido isn’t normally that easy. Have you been surprised at how easy the contract negotiations were?

“Not surprised, no, but the good relations between Seville and Barca made it easier. The new Board did things really well, Del Nido knew that I wanted to leave and it all worked out perfectly”.

When did you hear of Barca’s interest in you?

“I was at Rota with Seville on the third day of pre-season training. I saw I had a call from the President after training, which doesn’t normally happen. I tried to call him back, but he was busy, so I called my agent who told me what was happening”.

What was your reaction?

“Excited, it was marvellous news – a dream come true. I was coming to play at the best club in the world and with the best players in the world”.

Who did you call first?

“My wife and son. I asked my son a year or so ago where he would like me to play and he said Barca. So when I told him, he was very happy”.

Where does his support for Barca come from?

“He’s been a fan since Dani signed for Barca a couple of years ago”.

Do you think your time at Seville had reached a logical end?

“I’d done everything I’d set out to do there. I’d won a lot of titles and it was time for a change. The truth is that nothing could be better than a move here”.

What did you learn in your time at Seville?

“I matured a lot. I became a more experienced player on the pitch. I was just 19 when I went to Seville and I think my character and personality have improved since then and my technical skills too”.

Are you prepared for the pressure of playing for the best team in the world?

“Yes I am. My time at Seville has prepared me well and now I am stronger physically and mentally. I’m ready to deal with the pressure of playing for Barca”.

As an outsider, what most attracted your attention about Barca?

“Their style of play, the fans. When I came here with Seville, the atmosphere was incredible. Also, the group of players here and the atmosphere around the club in general”.

You won a lot at Seville, what are your objectives at Barca? 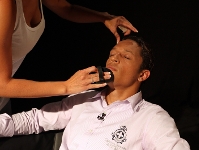 “To begin with, establish myself in the first team. Try to adapt as quickly as possible to my new teammates and the team’s style of play. After that, I want to make history with Barca”.

Do you think it will take a while to get used to Barca’s style of play?

“I’ll try and do it as quickly as possible. I’ll be asking for advice from my friends, so that they can help me adapt”.

What has Alves explained to you about Barca?

“That this is a marvellous club. He reckons it’s the best thing that ever happened to him. Every day is spectacular on and off the pitch”.

Have you imagined what it will be like to play with players like Messi, Villa, Xavi, and Iniesta...

“Of course! Since I got the news, I’ve been imagining what it will be like. You remember playing against them and now I’ll be alongside them. It’s a dream”.

What has Pep Guardiola said to you?

“That I should do everything I can to settle in as quickly as possible. My family will be here in a few days so that they can enjoy this unique moment in my career”.

And what has Alves explained to you about the boss?

“It’s an honour for me to be coached by Guardiola. He’s achieved everything as a player and a coach and is an example for us all. Dani told me he’s an exceptional person too”.

You are a versatile footballer - do you think that will help you win a regular place in the team?

“Yes, I’m sure it will. However, the most important thing is that I give everything when I get on the pitch. I’m available for the coach for whatever he needs from me”.

So what would you say is your natural position?

But you were originally right footed?

“I can play with either foot, for which I have to thank my dad who taught me everything. He always said that being able to play with both feet could make the difference and he was right”.

“Yes, for the rhythm of work I was doing, that did happen, but I’ve improved a lot over the last two years. I’m looking after myself more and better and have been following a personal programme so that my body can withstand the strains of my explosive style”.

Those injuries meant you couldn’t play as regularly as you’d have liked though?

“Yes, that’s true. Both at Seville and with Brazil. Missing out on the national team was the most important thing and that was a tough time for me. I had a lot of injuries on the run and that meant I lost my place with Brazil”. 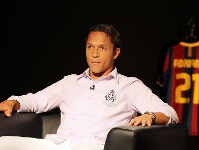 Adriano and the World Cup

Did it hurt you to miss the World Cup?
“A lot, yes. I though t I would go, but I’m still hopeful that coming to Barca and working hard here to win a place in the team will hopefully help me get back into the squad”.

You must have watched the tournament – how did you judge Spain’s performance?
“I always thought that they were the favourites and they deserved it. They played well and the best league in the world needed to have a World Cup win”.

How did the Brazilians react to their team’s performance?
“It was very frustrating. Nobody expected it, we thought we’d meet Spain in the final. We were unlucky, but doubts started to arise and that was decisive in meaning that we didn’t reach the final”.

What’s Adriano like outside football?
“I’m a simple person. I enjoy being at home with my family and my friends. I want to settle in in the city as quickly as I can and learn Catalan. I want to take the opportunity of learning a new language”.