Guardiola casts his eye over squad

Guardiola casts his eye over squad

In a press conference that lasted more than an hour at the Nou Camp this morning, Pep Guardiola agave an exhaustive overview of his squad, admitting that it’s in midfield that: “we may be missing a piece”.

It’s been two months and two days since the boss last faced the media, on May 17th, and his first words this morning were to welcome the press back, telling them: “it’s good to see you all again. It’s always a pleasure to be here”.

Guardiola gave a thorough run through of his ideas about the squad for next season, discussing possible signings and transfers, whilst admitting he prefers to work with a small squad.

Below, listed alphabetically, are the boss’s reflections on his squad:

With Chygrynsky sold and Marquez another possible departure, Guardiola admitted that Abidal could figure at centre half “occasionally – he has the qualities needed to play there”. 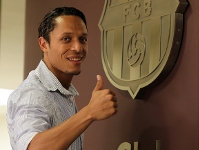 Guardiola was very positive about his incorporation, explaining: “he’s got dynamism and an intensity that will be really good for us” and revealed he’d be useful to allow Alves to take a rest: “Puyol is finding it increasingly hard to play at full back. I also didn’t want somebody who could only play at right back”.

Once again, the boss was full of praise for his young striker: “I’ve not seen him today, as I had other things to do, but I will. I’m really pleased that he’s continuing here. If he does what he did last year when he was vital in us taking the league title, then I know he’s going to make things tough for me. I hope I can give him the game time he deserves”.

Guardiola reckons his signing is difficult: “I can understand that he is an important player at Arsenal. They know that we want him. He’s a top player, young, educated here at this club and taken away from us when he was just 15”.

Pep knows his midfield needs strengthening and is looking for somebody like Xavi or Iniesta, or maybe Toure: “we’re a bit short of players in the middle”.

“It’s been a real pleasure to have worked with him. Barca have to be thankful to all the players who’ve played here. We have great memories of his time here and I hope everything goes well in the future”. Guardiola also explained that the decision to leave was Henry’s alone. 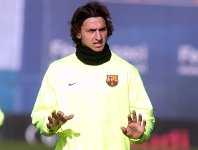 Although he’s counting on the Swedish striker, Guardiola admitted: “a player of his quality has to decide his own future”, insisting that like Marquez, Ibra must make his own decision as to whether he stays, whilst accepting that the player has not expressed his desire to leave and insisting he doesn’t want to sell him. “He came here to be a reference for the team, but an injury at the end of last season meant that he was out for a month and he didn’t start the last few games. He has always worked hard to achieve the status he has”.

The World Cup hero received fulsome praise, with the boss claiming: “it’s good that the goal that won the trophy came from such an unassuming guy who is so fond of the game. He’s such a normal guy. He had a few problems last season and let’s see if we can again enjoy him at his best this year”.

If there is no signing of a direct replacement for Touré, Keita could take over in the defensive midfield role.

As with Ibra, Guardiola left the ball firmly in the player’s court: “it’s down to him if he stays or not. We spoke about it before the World Cup” Guardiola also praised Marquez’s attitude during his seven years at the club.

Guardiola reckons Messi had a good World Cup: “he was one of the most active players in qualification, but they came up against a great German team. I’m sure it made him sad to lose, because things get to him, but I think he’s keen to get back and play as that’s what he enjoys”, adding he can come back from his break whenever he likes. 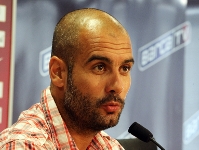 As with Chygrynsky, Guardiola was disappointed at the African’s departure, explaining: “it’s a big loss for us. I understand that he’s a player who wants to play more often, particularly in the big games and I couldn’t give him all the opportunities he wanted. He’s an impressive athlete, an extraordinary lad who I had a good relation with, but he wanted out. I did everything possible to keep him - everything and more. I feel very bad about it, but I hope he finds what we couldn’t give him at City”.

Lamenting his departure, Pep revealed: “I know it looks like I’m a liar because I said he would stay, but even though I have my views, the interest of the club must come first and the President told me we had to sell him. The economic question always holds sway over my opinions”.

Guardiola sees him as the replacement for Henry: “he can cover both positions well – down the middle and on the left wing. He’s always got goals, he’s very direct and good at finding space”.

Guardiola explained that he’d like the players out on loan last season to repeat their experience: “that’s our intention, but we know that if that’s not possible, they are Barca players and they will come back here. We’ll try and find a way out for them”. 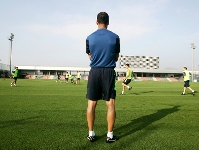 Josep Guardiola also answered questions about the World Cup success enjoyed by Spain: “when a team wins, it’s thanks to the contribution of all the people involved, though it’s true that our players played a key part, but they were managed by Del Bosque, who represented Madrid for a long time. This generation of footballers has won a lot and I have enormous admiration for the way in which Del Bosque has represented Spain. It’s good news for Spanish and Catalan football. It made me very happy to see them win”.

Guardiola hopes that “common sense” will prevail over Spain’s proposed friendly against Mexico set for August 11th: “the players aren’t back from holiday until the ninth and I can’t see them being fit to play two days later”. Barca themselves return from their Asia Tour on 9th August and face Seville in the first leg of the Spanish Super Cup on the fourteenth.

Guardiola also commented on Madrid’s new manager, Jose Mourinho: “he’s one of the best, if not the best manager in the world. If the best come to our game then that’s good for us all. This season we have to start from zero and build again, I’m sure Madrid will be very competitive, as they’ve not won anything for two seasons”.