The origins of the youth set-up (IV)

The origins of the youth set-up (IV)

In the first two articles of this series we looked at the essential contributions of Rinus Michels and Johan Cruyff to the youth system and then moved on to examine how the model had evolved. In this final piece, we look ahead to the future.

After all the success under the two Dutchmen and their successors , there’s a lot to live up to, but the current crop of youth coaches reckon that there is a bright future at the Masia.

Even before Spain’s win in South Africa, achieved with a decisive contribution from the Barca players, the success of the club’s youth team model was clear to see. For Carles Rexach: “it’s the way it is now because we have followed a route. Many of our first team players have followed the same system all their footballing lives, from the kids’ teams up to the first team”. 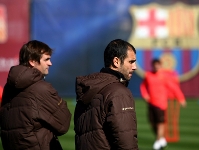 Albert Puig agrees: “Pep Guardiola has closed the circle. We have our own players leading the team and Catalan coaches and all the technical staff are Catalans. This is the Golden Era of the model”

If it’s hard to get to the top, it’s frequently even harder to stay there and the youth team coaches are clear about what is needed to maintain the production line. Albert Puig insists: “we have to take on board everything that can be useful, wherever it comes from. If we think that we have the model fixed and we don’t need to improve, then we will get stagnant and begin to go backwards”. Rexach echoes this idea, using Guardiola as an example: “I’m sure when he went to play in Italy there were many things he didn’t like about the way they do things over there, but I’m equally sure that the things that he brought back here the things that did impress him”. 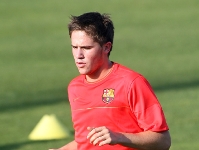 Albert Benaiges is certain that: “we won’t lose the essentially skill based character of our teams, but we do need to improve our defensive solidity a bit”, Something Rexach is in agreement with; “we have to be true to our model, but if we can with midfielders of 1,80 metres or more, because the game is getting more physical. We have to look for lads who play the game well. Maybe they have some areas that are not so good, but the important thing is that they know how to read the game”.

“The future is guaranteed”

That’s Albert Benaiges opinion and he explains: “I think that at every level in the teams we have at the club now, we can count on five or six lads who will definitely become professionals and we’ll have to see how far they go. The best ones will make it into our first team - the future is guaranteed!”. Albert Puig is slightly more level headed, believing: “we will continue on the right track, but it’s not easy to find so many good home grown players to come together in the first team. Now we are enjoying players like Iniesta and Xavi, but unfortunately, that’s not always going to happen”. 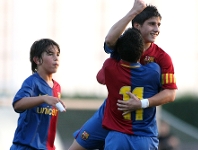 Whatever does happen, Barca will continue to develop the model which has brought so much success, though Benaigas accepts that: “over the last two or three tears, more and more teams are trying to copy our way of doing things. But they’ll not steal our magic formula, because the coaches hold it dear to their hearts and their minds!”. 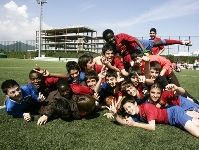