Busquets: “It’s starting to sink in”

Busquets is starting to come round to realising just what he and the Spanish team achieved on Sunday. “Until we got to Madrid and saw how the people reacted, we didn’t realise quite what we had done. Now I can see just what we achieved".

The FC Barcelona player Sergio Busquets was attending his summer camp in Badia del Vallčs, near Barcelona, and spoke about the triumphant homecoming. “It is making so many people happy that really matters” he said. 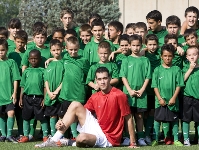 If there was anyone who exceeded expectations in South Africa, that man was Busquets. “Just two years ago, I was playing in the third division, and now I have won every title possible and imaginable. I’d just have been happy to get a place in the Barça first team and win a title. What has happened is beyond my wildest of dreams”.

So, is there anything else for him to win? “The European Championship is the next target for the national team while also winning new titles and extending my honours with FC Barcelona. The first is a long term objective, the other is about to start”.

On the friendly the Spanish team has programmed in Mexico on August 11, Busquets said “we’re on holiday now, and thoroughly deserved I think, so we’ll see what happens. But whatever happens, I’m a professional and if I have to go with the team to Mexico, it’s what I’ll do”. 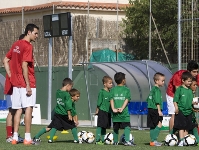 Sergio Busquets was delighted to learn that Pep Guardiola will continue to manage the club. “It’s good news for Barça and for me. He gave me the chance to play for Barça, to play in the First Division; he is an important man in my career. I am very happy he is still the boss, and hope that’s not just for one year, but many more”. 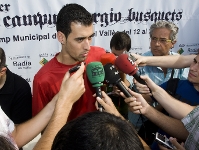 Things don’t stop here, says Busquets. He wants more. “Winning the World Cup is different to anything else. Very few players in this world can say they have been world champions, but I can, and I hope I can win it again”.