Iniesta rounds off an unforgettable season

Iniesta rounds off an unforgettable season

After an injury plagued season with Barca, Andres Iniesta was again able to smile with joy after his World Cup winning goal on Sunday.

The usually timid and controlled Iniesta exploded with happiness and joy after firing home the winning goal for Spain, knowing he’d scored one of the most important goals in Spanish football history – the goal that brought the country its first ever World Cup.

That’s not Andres’ first vital strike of course and his reaction on Sunday recalled the fantastic goal he scored in the 2009 Champions League semi final at Stamford Bridge against Chelsea to take Guardiola’s team through to the final that they went on to win against Manchester United.

Reward for an injury plagued season 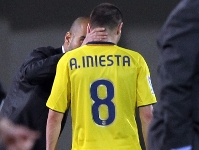 The final saw Iniesta back to his very best and the goal was a just reward after a season in which injuries restricted his appearances for Barca, as well as denying him the chance of helping the team lift the Spanish and European Super Cups in August as he struggled to overcome the injury he picked up after insisting on playing in the Champions League Final, despite not being 100% fit.

Andres was back with the squad in early September, but suffered another injury that saw him laid up for another two weeks in December and then again had a muscle injury on March 27th in the game against Mallorca, which saw him out of action until 5th April, only to suffer a recurrence a week later which put an end to his season with Barca. 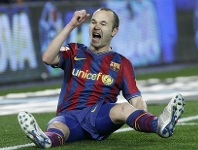 Iniesta played in just 29 league games last season, as well as 9 in Europe and 3 in the Spanish Cup. His goal against Holland, his second of the World Cup, was only his third of the season after scoring just once for Barca, in the 4-0 win against Racing in week 23 of the League. 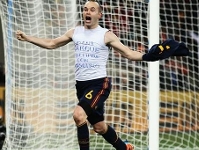 As well as the injuries, Iniesta also suffered a terrible blow at the start of the season with the tragic death of his close friend, the Espanyol player Dani Jarque. It was only fitting that after his goal on Sunday he ripped off his shirt to reveal a message underneath –“Dani Jargue – you’ll always be with us”. 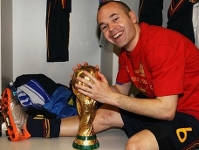 Send your messages of congratulations